London has had a turbulent and fiery history! It has been burned to the ground many times over in its 2000 year history and yet the London Fire Brigade (LFB) was only formed in 1866.

From the destruction of St. John’s Priory, Clerkenwell in 1381, the impact of the Great Fire of London, to the tragic blaze at Smithfield Market in the 1950s, ‘Islington Burning’ uncovers the story of fire fighting in the borough and commemorates 150 years since the founding of the LFB. The story is told through key objects from the London Fire Brigade Museum Collection, original material from Islington’s museum, archives and other collections from across the capital.

Here are 5 of the amazing objects on display in the exhibition:

Islington escaped the Great Fire as the wind changed direction. However many of the 100,000 people made homeless travelled north and camped out in Moorfields and Bun Hill Fields. This vestry minute book of the time records money donated to those made destitute following the fire. 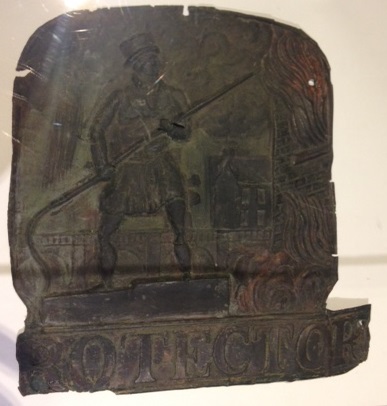 Many people were bankrupted by the Great Fire. Fire insurance started to fill a gap in the market and included fire insurance brigades who would put out fires in insured buildings to reduce costs. This plaque showed that X was insured so that the brigade would know a fire should be extinguished 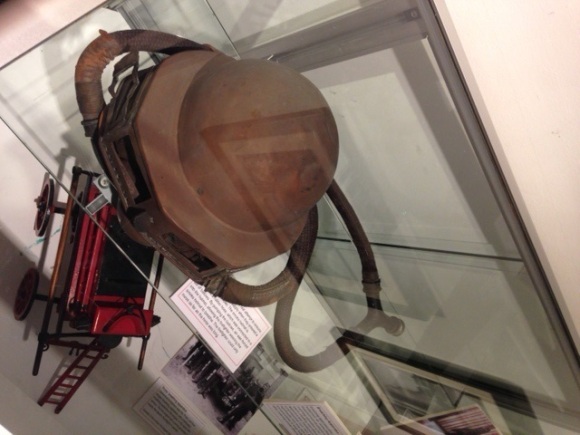 This was the first real attempt to ensure firefighters could breathe when in smoke-filled buildings. It would be connected via a rubber hose to a set of bellows that would be pumped by another firefighter to drive air into the helmet. A rope between the two firefighters was used to signal for more or less air, or if there was a problem. Firefighters could only go as far as the hose would allow and had to place their lives in the hands of the bellows-pumper.

Incendiary bombs were designed to set buildings on fire. Over 500 were dropped on Islington during the war. The Fire Guards’ job was to put these bombs out as quickly as possible to prevent fires spreading and raging out of control.

Come to see the exhibition to find out more!