Holloway Prison closed this summer -the last prisoner left on 17th June 2016. Until May it was the largest women’s prison in Britain, holding around 450 inmates.

Entrance to Holloway Prison just before it closed in June 2016

The prison was established in 1852 on Camden Road in Holloway, Islington, housing prisoners on remand, convicted women prisoners and debtors. It became female-only in 1902. Many well-known people have been held at the prison during its history, writer Oscar Wilde, suffragettes fighting for the right to vote, the British wives of German men interned as enemy aliens during World War I and Second World War fascists, including Diana Mitford and Oswald Mosley. In 1955 Ruth Ellis, the last woman ever to be executed in the UK, was hanged at Holloway. In 2016, Sarah Reed, an inmate of Holloway, tragically died under suspicious circumstances. 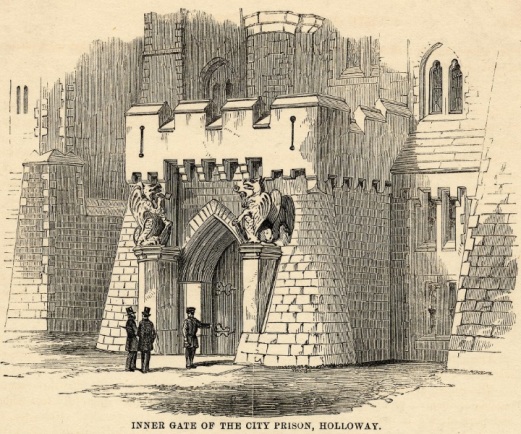 The original Victorian prison ‘Holloway Castle’ was an imposing building with turrets and castellations, its entrance flanked by huge griffins seated on pillars and holding keys in their claws. The prison was rebuilt in the 1970s to 1980s, making the prison more like a hospital with small corridors and privacy for the inmates.

As the prison was closing I was able to visit several times, first while prisoners were still there and later when they had all been moved to prisons outside London. I was not allowed to take pictures inside the prison and all electronic equipment had to be handed over in the gatehouse so I can’t show you any pictures for now.

Approaching the prison it is surrounded by blank brick walls with no obvious entrance. The reception is royal blue with a Holloway Griffin doormat. There are signs everywhere mainly to control keys leaving the building. All staff wear a belt and key-chain to which they attach their own bundle, and when going through the double air-lock to leave they have to show their empty key chain to the gate staff -an alarm sounds if they forget.

The staircases in the prison are wide and simple with jointed varnished wooden bannisters. Every door needs locking and unlocking, so by the time you’ve actually come into the main prison you’re behind at least 5 locked doors and feel like you might never get out.

The facilities at the prison include a beautiful wooden sports hall, swimming pool with a Holloway Griffin in blue tiles in its centre, an education department including a pottery studio and kiln around a central garden which was increasingly overgrown each time I visited, gardens and a henhouse and a chapel and smaller religious room used for other faiths.

The wings were much more cramped. I didn’t visit wings with prisoners still living there, so there was a strange air of dereliction with photos ripped off the walls, no bed linen or personal belongings. In each cell, whether a single, double or five-bed dorm (of which only four beds were ever used) was a sink or two and a toilet. Above the sink was a tiny plastic mirror 10cm a side. Each bed had a noticeboard above which was where inmates could put up their pictures, covered in drawings, bits of graffiti and toothpaste which had been used as glue. Association rooms in the wings had hairdryers and straightening tongs wired directly into the wall with the same tiny mirrors above.

We are hoping to be able to collect some objects from the prison to enter our museum collection and also to do projects working with ex-prisoners and staff of Holloway Prison to record the story before the place disappears forever. If you have any stories of the prison you would like to share please get in touch on roz.currie@islington.gov.uk.