In 2016 artist Ella Medley-Whitfield worked with teacher Ed and Year 1 at Montem School on the exhibition Imagine Islington.

53 Cross Street, Islington is a grade II-listed Georgian town house, built in 1785. Its first owner was Thomas Vernon, but many different people have lived there over the years including the Tiley family, who ran a metal engraving business in the back yard. During the 1990s, Martin King moved in and started to explore the house. By this point the house had been converted into bedsits.

Martin sought to investigate the history of the house, removing the layers of intervention to rediscover the house’s Georgian character. He removed fake walls, looked under floorboards and peeled off wallpaper, collecting the traces of those who had lived in the house before him. In the process he found hidden treasures, such as historic wallpaper fragments, pieces of clothing and adornment, old toys, bottles and WWII artefacts. He also found a hidden message behind some nailed-up shutters. Tucked inside a bloodstained and much-darned stocking was a piece of wood inscribed ‘George Shaw went to Aameica, March 1785’.

Martin took photographs of the process, revealing a house covered by a thick veil of dust and filled with the decaying memories of a forgotten time. Montem Primary School chose to work with three of the found objects, a Victorian child’s shoe, glasses and belt buckle, as well as exploring the wallpaper fragments and context of the found objects. 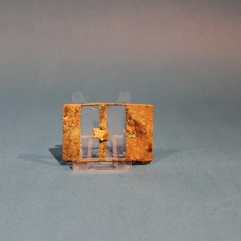 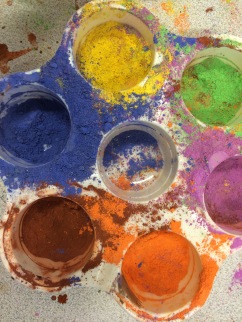 Click here to find out more about the final artworks created by Montem Primary School and Ella Medley-Whitfield as part of the Imagine Islington Project.