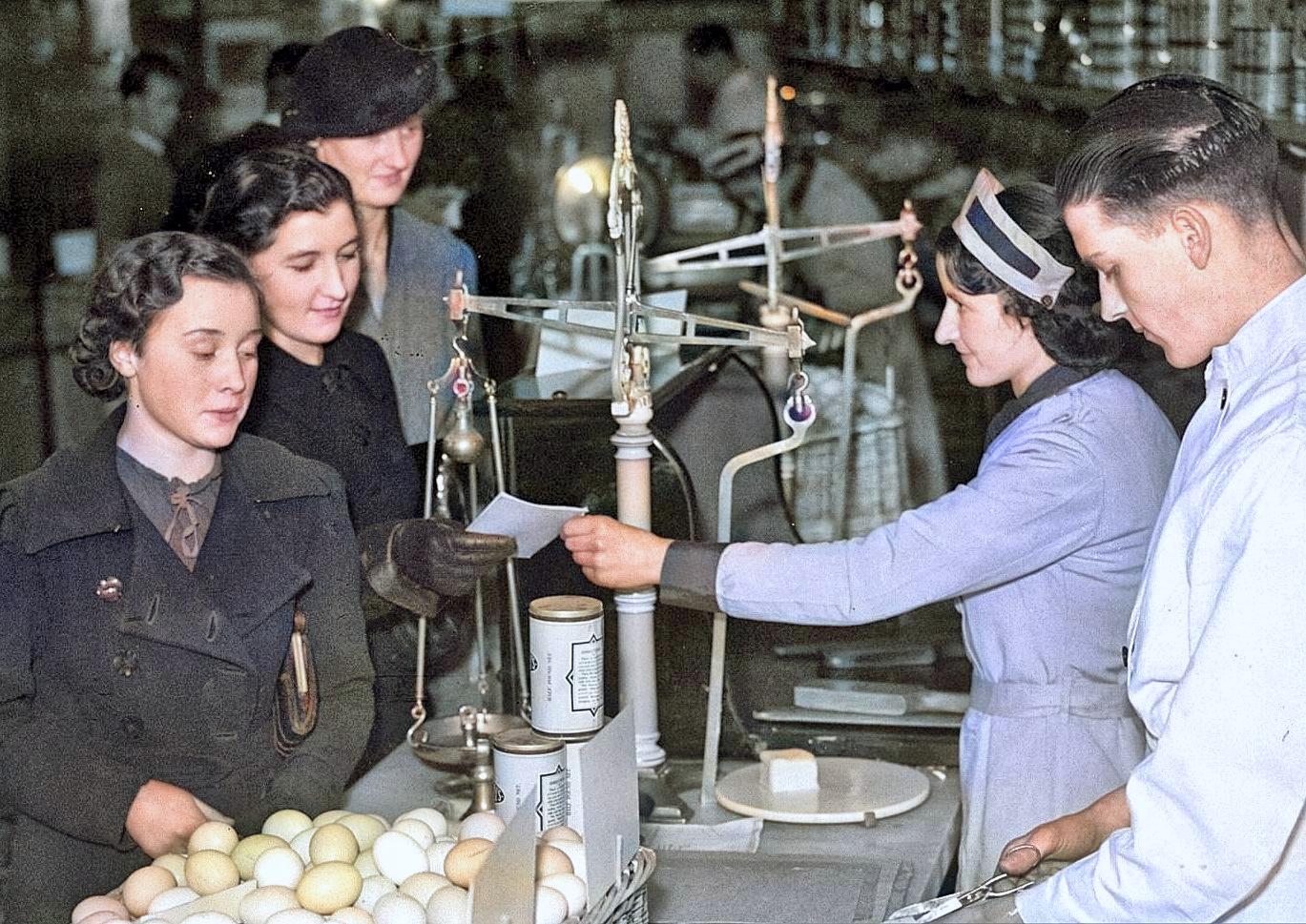 As part of the exhibition We’ll Meet Again: Islington on the Home Front in Photographs 1939-45, we look at how the people of Islington and Finsbury prepared the Home Front for the Second World War.

The people of Britain endured the Second World War in an overwhelmingly stoical manner. The response to war on the home front was one of practicality, where people changed much of their lives to adapt to a new era.

By the Second World War, a number of essential items consumed or used by the British were coming from abroad, such as tomatoes and fruit; however, trade disruptions at this time made products scarce. By January 1940, the Ministry of Food began overseeing rationing to ensure the fair distribution of food, materials and goods. Each individual, whether man, woman or child, was given a ration book with coupons. Essential items, such as sugar, meat, cheese and cooking fats, were key rationed items; however, not all food was rationed – fruit and vegetables weren’t, but were often in short supply. In response, people were encouraged by the government to start growing vegetables in their own gardens or to ‘Dig for Victory’ in their public parks.

People on the home front were required to undertake diverse new tasks. Women began to work in ‘white-collar’ occupations and in jobs, such as clerical work, that were traditionally reserved for men. Air Raid Precautions services (subsequently Civil Defence Service) were integral in reporting and dealing with bombing incidents. First-aiders were employed to offer immediate help in response to air raids.

The Auxiliary Fire Service (AFS) was formed as part of the Air Raid Precautions to supplement the work of fire brigades at local level. It was superseded in August 1941 by the National Fire Service. Members of the AFS were unpaid part-time volunteers, but could be called up for full-time paid service if necessary. Approximately 1.5 million men and women served within the Civil Defence Service during World War Two, almost 7,000 of which lost their lives.

Children of all ages would also get involved in the war effort. Older boys and girls joined the Boy Scouts and Girl Guides. They supported Air Raid Precautions by acting as messengers or fire-watchers. Younger children helped salvage war materials, raised money for munitions or knitted items for troops, demonstrating that anyone could ‘chip in’ for the war effort.

Residents of Arundel Square, near Highbury and Islington Station, seen here digging their own trenches and an air raid shelter in a section of the square’s gardens.

The ‘Dig or Die’ slogan, written on placards in the photograph, was not an official term but it sums up the urgent nature of ensuring that protection against air raids was taken seriously. Ultimately, the square suffered only light damage during the war, with just a few houses on the west side receiving direct hits and no reports of any fatalities.

Sandbag usage was among the first precautions that were undertaken in protecting buildings during an air raid. The use of sandbag ‘revetments’ to protect buildings from the perils of bomb blast became a common sight on the Home Front, as seen here against the walls of the ‘Cally’ Road Baths.

Sand and soil were brought in from various places in and around London. One of the most popular excavation sites was on Hampstead Heath. Men, women and even children volunteered to fill bags.

At the time that this photograph was taken, a huge effort was in progress using posters to encourage recruitment to the armed services, as can be seen here with ‘encouragement’ pasted on nearly every surface. Note the overriding message on the top of the side wall, which announces “National Service is the business of the citizen.”

Posters aimed at civilians included simple instructions, motivational messages, and humorous illustrations, urging everyone to ‘do their bit’ for the war effort.

A fresh batch of eggs are available, as a shop assistant removes
coupons from a customer’s ration book in an Islington grocery store. An adult’s weekly allowance included one fresh egg (plus an allowance of powdered egg) and 2oz (56gms) of butter.

Rationing began on 8 January 1940 when bacon, butter and sugar were rationed. By 1942 many other foodstuffs, including meat, milk, cheese, eggs and cooking fat were also ‘on the ration’. Clothes and many other goods were in short supply during the war and also rationed.

The people of Islington collecting for the ‘Islington Spitfire’ at the Holloway Arcade. The day’s donations totalled just over £89, the target being £5000.

In May 1940 Spitfire Funds were launched nationally. The Spitfire fighter aircraft, which protected London during the Battle of Britain, captured public imagination and it was a matter of national pride to have a Spitfire named after your fund. The ‘Borough of Islington’ Spitfire Mk V was presented by the borough after May 1942, when sufficient funds were raised.

During the Second Word War, women were employed in work that had traditionally been undertaken by men. Once such occupation was the trimming and distributing of hurricane lamps. This captivating photograph shows women working for Islington Council.

Hurricane lamps were run on paraffin and were widely used following air raids, when gas and electricity supplies had been cut. However, the lamps weren’t entirely safe as vapours from spilled fuel could ignite. Hurricane lamps are still extensively used today in areas without electrical lighting.

Over the coming weeks, we will be sharing more images from the exhibition We’ll Meet Again: Islington on the Home Front in Photographs 1939-45. Next week we’ll be looking at more images from life on the home front in Islington and Finsbury during the Second World War.